The Society holds 3 main events a year ( March/ April, May/June and October) playing fabulous courses such as Swinley Forest and New Zealand Golf Club and to which guests can be invited.  We also enter teams into various Inter Livery events and have twice ( so far)  finished runners up in the prestigious Prince Arthur Cup Inter Livery competition , held annually at Walton Heath. We have also been fortunate to win a number of other competitions over the years including the Lord Mayor’s Annual Charity Golf Day event at Moor Park in 2018.

Members of The Company who have a recognised golfing handicap are eligible to join the Society. Simply contact the Clerk who can provide the contact details for the Golfing Society Secretary.

A rainy bleak morning on 26th September saw 22 teams of 4 arrive at Hadley Wood Golf Club for the Annual Golf Day in aid of the Lord Mayor’s Charity Appeal.

The rain ceased at 8.52 with the majority teeing off at 9.00.  A dry day ensued and a wonderful day was capped with The Lord Mayor presenting prizes to the winners, City of London Police  with 103 points, 2nd were City Livery Club  101 points and 3rd ( on countback) W C Info Technologists A team with 94.  We were unable to match our winning form of last year but a great day was had by all.

Cliff Knowlden and Jason van Praagh had put the day together (planning began in Sept 2018!) and on the day were aided enormously by Klaus Schreiner, Michael Bowles, Charles Burrows, Annie Cripps , Corinne Dissen together with Yasmin and Pauliina from the Lord Mayor Appeal Office.

All went very smoothly with on line and live auctions/ raffle / a Heads and tails competition plus entry fees for Nearest pin competitions  and mulligans.  We are still totting up final financial position but we delighted to have raised significantly in excess of £10,000. 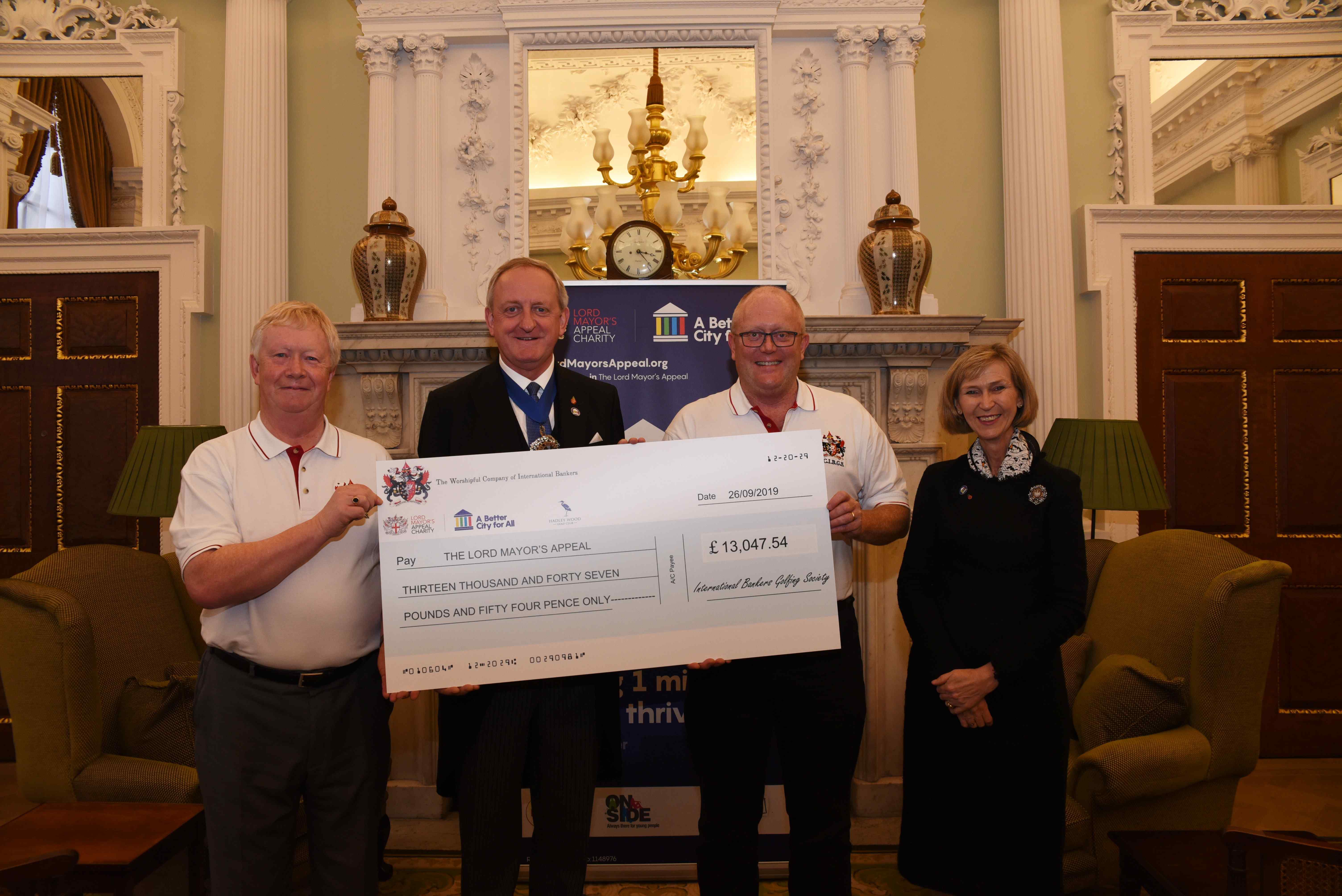 Our Golfing season drew to a close in October. On 3rd October we went to Swinley Forest.  Always a very special place but this year....wow, it looked magnificent with beautifully manicured fairways and heather.  It is an absolute gem and if you want to be one of the relative few that get the chance to play it, make sure that you put next year in your diary (date will be Thursday Oct 1st 2020).

The de la Barre Trophy was won by Tom Dissen and the Korts Salver by Andrew Lee. Guest winner was James Burrows (son of Charles) with a superb 42 points (playing off 10).  Nearest pin prizes were won by Doug Hutton (guest of Peter Hinson) and Trevor Bush.

The 13 hole afternoon greensomes saw some incredible scores. Winners were Danny Mead and Rob Lee (guests of Cliff Knowlden) who shot 4 under par for 33 points, beating Tom and Trevor on countback. In 3rd place were John Naish and his guest Robert Drake with 30 points.

Jason Van Praagh won the Mallory Trophy with the best members’ score through the year for his 36 points at Walton Heath in April.

This was Cliff’s final event as organiser, a task he has undertaken for some 15 years.  Peter Hinson has taken over the Golf Society event organiser role from 2020 whilst Jonathan King and Trevor Bush will organise our participation in various Inter Livery events. Best wishes to all of them.

Pictured below Andrew and Tom with their trophies and also Jason with his.

The very last event this year was on 18th Oct when a team of 4 led by Andrew Lee and including Tom Dissen, Cliff Knowlden and Charles Burrows represented the Company in the golf day organised by the World Traders at Mid Herts Golf Club .  After incessant rain for the best part of a week the course was very wet but perfectly playable. Thankfully no rain on the day saw us finish a very creditable 3rd   with 103 points ,  behind the World Traders in 2nd place( on 105)  and The Bricklayers and Tilers who were worthy winners with 109.

July is always a busy month for our golf teams.

On 17th Cliff Knowlden, Trevor Bush, Chris Lyons and Michael Bowles played in the WC Information Technologists golf day at Beaconsfield ( a new venue for some of us).

Runners up were World Traders with 82 points and winners were The Porters  on 85.   HIghest individual score on the day was 37 .

Then on 25th,  2 teams entered the annual Ray Jeffs inter livery event at Hartley Wintney.  Andrew Lee, Chris Lyons, Jonathan King and Peter Hinson were team A whilst John Treadwell,John Naish, Michael Bowles and Michael Llewelyn-Jones were our team B.  Again best 2 from 4, and the winners were the Air Pilots with 90 points closely followed by the Distillers on 88.  Our team B were close to the prizes with 84 but special mention goes to John Treadwell who won the individual event with a fabulous 44 points ( off 11 h cap).

Details for our final event of the year at Swinley Forest on Oct 3rd have recently been circulated.

We are organising the Annual Lord Mayor’s Charity Golf event this year. It takes place on 26th Sept and all is now in place. We have an excellent 22 team turnout from across the City.

A report on that event will appear later in the year but fingers crossed for a successful fund raising drive on the day.

We fielded 2 teams at the annual Golf Day hosted by Worshipful Co of Marketors at Verulam on July 1st.  Over the years this event has been a very happy hunting ground for us but it was not to be this year.

Andrew Lee ( Capt) with Tom Dissen, Mark Stevenson and Peter Hinson were our team A with Cliff Knowlden, Michael Bowles, Jonathan King and Klaus Schreiner ( 2018 winners) team B.  Winners of the event were the Brewers with an excellent 116 points (best 3 to score per hole).  Our Team B had 106 points.

Thankfully we did get a mention,  the hosts were delighted to announce that we were not in the prizes but then had to finish up having to indicate that Peter Hinson won the Lord Mayors Charity challenge which was a nearest the pin competition on the golf simulator played at Hazeltine National Golf Club’s famous par 3 17th.

On May 16th our new Captain , Andrew Lee led a team with Tom Dissen, John Nestor and Mark Stevenson in the Prince Arthur Inter Livery competition at Walton Heath. Scoring on the day proved difficult for all but the winners ( well done to The Cutlers) , but we finished 6th out of a field of some 50 Companies, thus ensuring our entry into next years event.  I hear that the bunkers were in excellent condition ( enough said!)

Our Spring Trophy meeting was held again at New Zealand Golf Club on 22nd May.  What a picture that venue presents, a beautiful course surrounded by rhododendrons, many of which are in full bloom in May. The sun was shining and the afternoon was surprisingly warm.

The morning singles saw Cliff Knowlden win the Spring Trophy with 35 points, narrowly beating Trevor Bush on countback. Trevor thus won the Keller Cup.  Runner up in the singles was Tom Dissen (34) with Charles Burrows 3rd on 32.   A good number of guests enjoyed the day, so much so that the Guest winner Phil Swanson- guest of Cliff)  had a best of day score of 39 points . Nearest pin prizes were won by Captain Andrew Lee and  Danny Mead ( another guest of Cliff).

After a super lunch, we embarked on the afternoon greensomes competition. It may have been something to do with the wine at lunch but temperatures had seemingly gone up several notches and it was very warm!  Scoring was hot too with Terry Upham’s guests, Allan Brodie and Wayne Collier scoring a hefty 30 points over the 13 holes and winning the afternoon  by 1 point.

The next 2 months will see us entering teams in a number of inter livery events- good luck everyone.

We will return to Swinley Forest on October 3rd and details for that meeting will be circulated around mid July.

The first event of our Golfing calendar is the AGM event which this year was held at Walton Heath Golf Club. Andrew Lee became Captain for the next 2 years with Jason van Praagh his Vice Captain.

A good turnout of 36 ( incl guests) saw us have good weather and some good scoring.  Winner of the Captain’s prize and AGM Salver was.........Jason with 36 points, with John Treadwell and David Roberts scoring 34 and 32 respectively.    Pete Weller ( guest of Cliff Knowlden) won the guest prize , with a best score of the day of 42 points off a 10 handicap ( impressive!).  The Ladies prize was won by Jane Thomson ( guest of David Potter).  Andrew Lee won the “seniors” prize with 32 points.

We enter teams in various inter livery events throughout the year and the first of the year was the World Traders Golf Day at Woldingham at end April.

Our team consisted of Tom Dissen ( acting Captain in the absence of A. Lee) John Illsey, Charles Burrows and Mark Stevenson.

The course was in good condition and the weather perfect for golf with 16 teams participating in the event.

The WCIBGS team put in a commendable performance and finished with a score of 112 points, but outside the top 3 places.

The winners were The Farriers on 125 points, 2nd, The World traders on 120 points and in third place The Tilers & Bricklayers on 118 points.

The WCWT organizers thank all participating teams for supporting their day and looked forward to seeing us again next year. 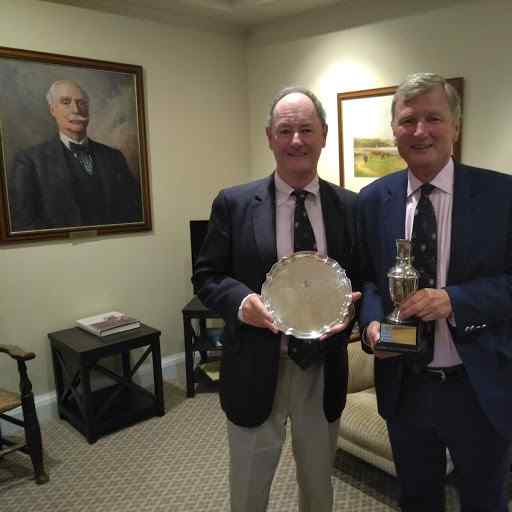 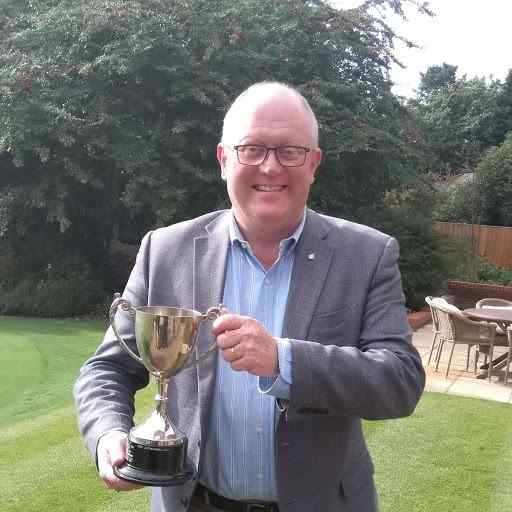